The History of the Qur'anic Text: From Revelation to Compilation 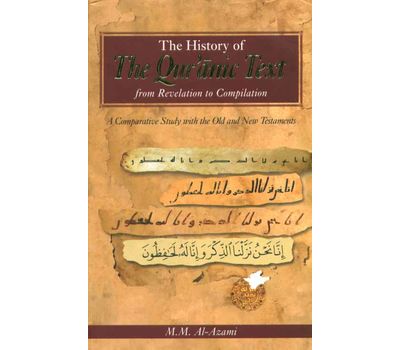 The book examines the reception of Divine revelations, Prophet Muhammad's {SAWS} role in teaching and dissemination the revealed verses, the text's compilation under the Prophet's own guidance, and the setting of its final external shape shortly after his passing away.

It covers origins of the Arabic language, its paleography and orthography, the so-called Mushaf of Ibn Mas'ud, and the strict methodology employed in compiling all the verses revealed over a period into a single volume.

The work also investigates the comparative histories of the Old and New Testaments, utilizing Judeo-Christian sources, including the Dead Sea Scrolls and uncovers a startling range of alterations touching almost every facet of Biblical Scriptures. It is thus able to assess the outpouring of the speculative theories regarding the Qur’an as being motivated little by scholarship or academic curiosity.

The author, Dr. Al-Azami, is a professor at King Saud University and received the prestigious King Faisal International Award (1980) for his contribution to the study of Hadith.

I. The History of the Qur'anic Text

3. Revelations and the Prophet Muhammad {SAWS}

5. The Recording and Arrangement of the Qur’an

6. The Written Compilations of the Qur’an

8. The Evolution of Reading Aids Within the Mushaf

9. The History of Arabic Paleography

10. Arabic Paleography and Orthography in the Qur’an

13. The So-Called Mushaf of Ibn Masud and Alleded Variances Therein

II. The History of the Biblical Scriptures

15. The Old Testament and its Corruption

17. The New Testament: its Anonymous Authorship and Corruption

18. The Orientalist and the Qur’an

19. Orientalist Motivations: a Study of Subjectivity