The Beneficial Message: The Definitive Proof In The Study Of Theology

Home/Beliefs and Practices/Islamic Beliefs (Aqaaid)/The Beneficial Message: The Definitive Proof In The Study Of Theology
103 of 122 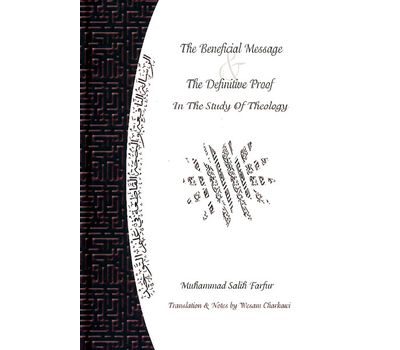 The layout of this publication presents the Arabic text of Risala an-Nafi'a wa Hujatul Qadi'a fi 'Ilm at-Tawhid immediately followed by its translation into English. Generally, after the English translation, supplementary notes have been translated and added from various other sources from Ahl as-Sunnah wal-Jam'a including:

The author, Shaykh Muhammad Salih Farfur (born in Damascus in 1901 and died 1986) was renowned for his piety, knowledge and diligence in the pursuit of educating others who sought knowledge. He founded the famously known institute in Syria known as Al-Fatih, graduating students by the thousands as well as a specific branch of the school for females. This text is currently taught in Al-Fatih Syria and other Islamic institutes world-wide.