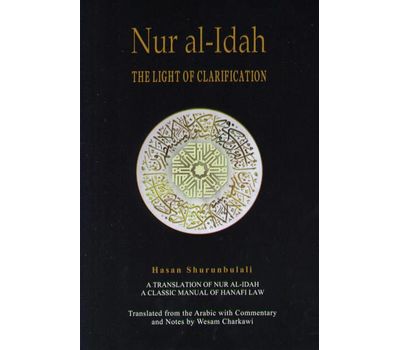 Nur al-Idah is a Hanafi text which includes vast areas of jurisprudence, namely, the rulings pertaining to worship. It leaves the student or general reader well prepared to deal with the majority of matters ranging from purification, prayer, funerals, zakat to hajj.

The translation of Nur al-Idah is displayed in bold while the commentary and explanation, the majority of which is from Maraky al-Falah is written in plain text. It has been the translators attempt to prepare the text of Nur al-Idah in a manner that can be read independently without reading the commentary. However, commentary is essential for further explanations of the actual text and for this reason it entails views from other Hanafi sources such as al-Ikhtiyar and al-Hidayah, as well as the position of other schools, such as the Shafi’i Madhhab. This is intended to give the reader a broader perspective on matters and demonstrate the similarity between the various schools of thought.

Referencing the text with evidence, namely, with Quran or hadith has been given on most issues and that areas where it is not, is either due to qiyas (analogical reasoning) or because of its unanimous agreement on that particular issue. A translation may simplify many things, though this will still require the complete and concentrated attention of the reader. Also, many examples and explanatory notes have been included. These are, for the most part intended to clarify what might otherwise have been an obscure or ambiguous passage in the original or as a result of the translation.

The main Hanafi books, such as The Hashia of Ibn ‘Abidin, al-Hidayah and al-Mabsut were referred to, as well as consultation from some of the most eminent scholars. The text also includes sample examination questions in an effort to help the reader view the laws in a different light and to enable him to deal with legal rules in a practical way.