Reliance of the Traveller: A Classic Manual of Islamic Sacred Law

Home/Fiqh/Classic Books and their translations/commentaries/Reliance of the Traveller: A Classic Manual of Islamic Sacred Law
126 of 152 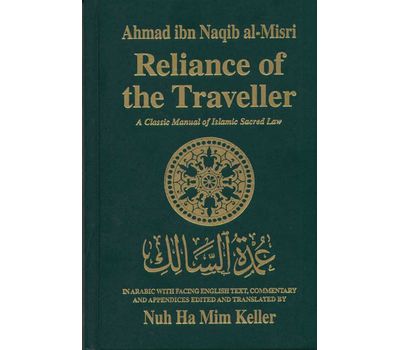 FROM THE BACK COVER:

This work is the first translation of a standard Islamic legal reference in a European language to be certified by Al-Azhar, the Muslim world’s oldest institution of higher learning. It presents an explanative interpretation of ‘Umdat al-salik, a classic Sunni manual of Sacred Law by Ahmad ibn Naqib al-Misri (d. 769 AH/1368 CE) that comprises the legal work of Imam Nawawi, the great thirteenth-century Shafi’i hadith scholar and jurisprudent. Ibn Naqib’s famous handbook carefully summarizes the conclusions of Nawawi’s legal encyclopedia al-Majmu’ on all aspects of practicing Islam, from prayer, marriage, jihad, and inheritance to the other facets of Islamic life.

The book contains over six thousand rulings of Islamic Law, more than any other English reference volume. Of the 136 works drawn upon in its commentary and appendices, 134 are primary Muslim sources from the original Arabic. It also has a detailed subject-index of ninety-five pages that lets readers easily find the answers they need about Islamic practice, as well as a full biography of every person mentioned in the work (391 biographies).

The entire Arabic text, which appears beside the English translation, has been carefully reviewed by the American Muslim translator Nuh Ha Mim Keller over the course of five years of study in Syria and Jordan under two traditional sheikhs, who have commentated upon both the basic work and the numerous appendices that complement it. The latter form an integral part of the book and present readers with original texts and translation from classic works by Imam Ghazali, Qurtubi, Nawawi, Dhahabi, Ibn Hajar Asqalani, Suyuti, and others, on topics ranging from Islamic law, faith, and spirituality to the sciences of hadith and Qur’anic exegeses (tafsir), making the work a living reflection of traditional Islam as understood by some of its most famous scholars, and a valuable resource for all who want to deepen their knowledge of the laws of the Divine.

“There is no doubt that this translation is a valuable and important work, whether as a textbook for teaching Islamic jurisprudence to English-speakers, or as a legal reference for use by scholars, educated laymen, and students in this language.” Dr Taha Jabir al-‘Alwani, President of the International Institute of Islamic Thought.

“We certify that the above-mentioned translation corresponds to the Arabic original and conforms to the practice and faith of orthodox Sunni Islam (Ahl al-Sunnah wa al-Jam’ah)” Al-Azhar.

“This is a truly magnificent piece of work that will prove to be indispensable to the English-speaking Muslims and to any Western student of Islam….” Professor Farhat J. Ziadah, Journal of the American Oriental Society

“This text will become the standard by which other translations are judged.” Professor A. Kevin Reinhart, MESA Bulletin