A TREASURY OF HADITH: A COMMENTARY ON NAWAWI’S SELECTION OF PROPHETIC TRADITIONS

Home/Hadith and Sunnah/Hadith collections and commentaries/Classic collections & Their Commentaries/A TREASURY OF HADITH: A COMMENTARY ON NAWAWI’S SELECTION OF PROPHETIC TRADITIONS
6 of 251 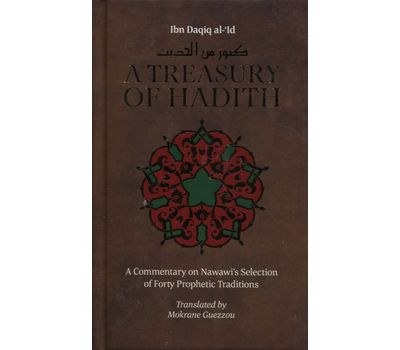 Imam Nawawi (1233-77), the author of the hadith selection, was an authority in the Shafi‘i legal school, hadith master, biographer, lexicologist and Sufi.

Shaykh al-Islam Ibn Daqiq al-‘Id (d.1302), is accounted as one of Islam’s great scholars in the fundamentals of Islamic law and belief, and was an authority in the Shafi‘i legal school.

Mokrane Guezzou is the author of Shaykh al-Hashimi: His Life and Works, and the well-known translator of over ten works including Qur’an commentary Wahidi’s Asbab al-Nuzul and al-Buzaydi’s The Adab of the True Seeker. He lives in Jordan.