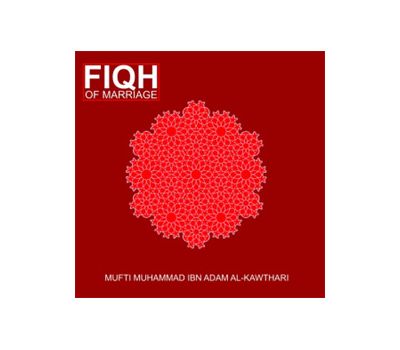 It is a comprehensive work of reference for all marriage related issues such as selecting a suitable spouse, engagements, marriage ceremonies, marriage contracts, forced, arranged and secret marriages, etiquettes of intimate relations, rights and responsibilities of the spouses, polygamy, pregnancy, upbringing of children and much more. All matters, however personal, are dealt with in a sensitive yet refreshingly open and frank manner.

The lectures are not a dry account of legal rulings and injunctions; rather they are an authoritative record of the Fiqh of Marriage accompanied by valuable insights and personal guidance from the learned Shaykh. The content of the discourses, given in light of the Qur'an, Sunna and classical works of Fiqh, is both absorbing and pertinent.

Mufti Muhammad ibn Adam al-Kawthari is a young traditionally trained scholar who studied in different parts of the world. Born in Leicester, UK and raised under the guidance of his illustrious father, Shaykh Mawlana Adam, he started learning about Islam from a very young age and memorized the Qur’an at the very tender age of nine. He initially studied the Arabic Language and various other traditional Islamic Sciences at Darul Uloom, Bury, UK, under many Shaykhs notably, Shaykh Muhammad Yusuf Motala (may Allah preserve him) and received authorizations (ijazas) in various books including the six major books of Hadith. He also took part in a one year course of specialization in the science of giving legal verdicts (Iftaa).

After graduating from the Darul Uloom, he travelled to Karachi, Pakistan, where he studied under one of the greatest living scholars, Justice (Rtd) Shaykh Mufti Muhammad Taqi Usmani (may Allah preserve him) and others. Later, he travelled to Damascus, Syria, where he increased in experience and knowledge by studying under the great Ulama there and received authorization (ijaza) from Shaykh Abd al-Razzaq al-Halabi, Shaykh Dr. Abd al-Latif Farfur al-Hasani and others.

His works include: The Issue of Shares, Simplified Rules of Zakat and Birth Control & Abortion in Islam. He has also published Shaykh Zakariyya Kandahlawi’s Wujub I’fa’ al-Lihya (The obligation of growing a beard) and Shaykh Khalil Ahmad Saharanpuri’s Mabahith fi Aqa’id Ahl al-Sunna (Discussions in the beliefs of the Ahl al-Sunna), both with critical analysis and footnotes in Arabic. He is also widely known for his detailed and well-researched fiqh related articles on the Sunnipath website (www.sunnipath.com).

He presently resides in Leicester, UK, where he is a teacher of various traditional Islamic sciences at Jamiah Uloom al-Qur’an, and helps people with their queries and problems at the Darul Iftaa, Institute of Islamic Jurisprudence (www.daruliftaa.com).