Performing Hajj: A Visual Guide to the Journey of a Lifetime (DVD)

Home/Other Products/Multimedia/CDs/DVDs/Performing Hajj: A Visual Guide to the Journey of a Lifetime (DVD)
27 of 48
Save
18% 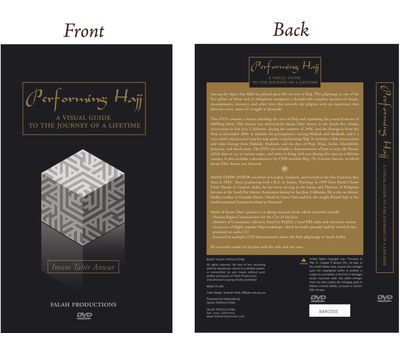 Among the rights that Allah has places upon His servants is Hajj. This pilgrimage is one of the five pillars of Islam and its obligation comprises a dynamically complex mixture of rituals, encampments, journeys and other rights that provide the pilgrim with an experience that deserves every ounce of struggle is demands.

This DVD contains a lecture detailing the rites of Hajj and explaining the practical means of fulfilling them. The lecture was delivered by Imam Tahir Anwar at the South Bay Islamic Association in San Jose, California, during the summer of 2006, and the video and photos are from the Hajj in December 2006. It includes the prerequisites, visiting Makkah and Madinah, and is a very useful and step-by-step guide to performing Hajj. It includes a slide presentation and video footage from Makkah, Madinah, and the days of Hajj: Mina, Arafat, Muzdalifah, Jamaraat, and much more. The DVD also includes a demonstration of how to wear the Ihram, which duas to say at various stages, and items to bring with you during this once-in-a-lifetime journey. A 3D tour the Kaaba provides a visual reference for important landmarks.

A group of young American Muslims planned to perform Hajj in December 2006/1427H. They began their preparations one year in advance and held monthly meetings at their homes in order to be well prepared. They attended Imam Tahir Anwar’s annual Hajj training workshop at the South Bay Islamic Association in San Jose, California. Shafath Syed, a member of this group thought it would be beneficial for many others to have access to this workshop and information.

3D Tour of the Kaaba