A Thematic Commentary on the Qur'an 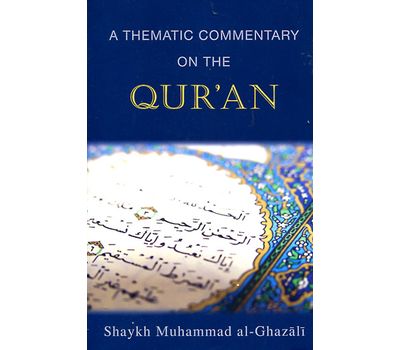 Muslims are enjoined, along with the rest of humanity, to ‘read’ the two great Books of Revelation and Creation, i.e. the Qur’an and the natural world. Reading one without the other will result in an imbalance detrimental to the existence (and prosperity) of humankind on earth, indeed to the divine purpose in the cosmos.

A Thematic Commentary by the late Shaykh al-Ghazali is a significant contribution to the first reading, i.e. that of the Qur’an—the repository of divine truth and enlightenment. Already of course there is a wealth, an abundance, of exegetical work on the Qur’an. But while early scholars endeavored to elucidate many linguistic, historical, and miraculous aspects of the sacred and challenging text, al-Ghazali’s contribution is somewhat unique (and modern) in the sense that it focuses on the organic unity of each surah highlighting the logic or inherent reasoning that courses through the surah and unifies its various components and images.

No exegesis is by itself sufficient for a full understanding of the Qur’an. But this work is an indispensable companion in the quest for a better comprehension of, and a closer affinity with, the sacred text.

Sheikh al-Ghazali (1917-1996) held the post of Chairman of the Academic Council of the International Institute of Islamic Thought in Cairo. He authored more than sixty books, many of which have been translated into various languages, and was also the recipient of many awards, including the First Order of the Republic of Egypt (1988), the King Faisal Award (1989) and the Excellence Award from Pakistan.