Commentary on the Creed of At-Tahawi (Ansari) 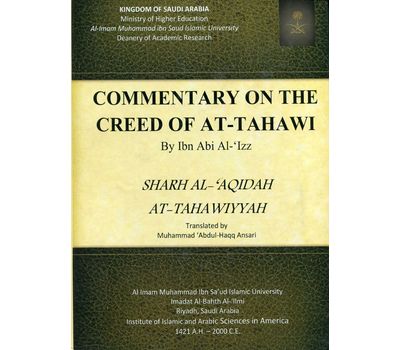 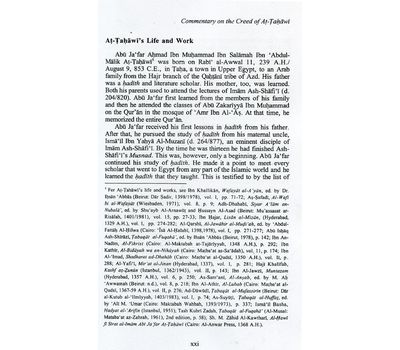 The Al-Aqeedah At-Tahawiyyah (The Creed of Tahawi), written by Imam Abu Ja'far Ahmad ibn Muhammad ibn Salamah at-Tahawi (d. 231 A.H.) is an outstanding text in Islamic Theology. The brief doctrine is a treatise with 105 tenets which summarize the beliefs and creed of Islam. It was written over a thousand years ago, and, to this day, it is used as a standard to define the belief and creed system of Islam. It is agreed upon by all the major scholars and theist of Islam. It represents the beliefs of Ahl Sunnah wal Jamaah.This is its authentic commentary.

In an age of bewildering spiritual and intellectual confusion, creed has never been more important. Every Muslim is obliged to learn it and is promised protection from deviant beliefs by following the unassailable texts of the scholastic community of Islam. Of them all, The Creed of Imam al-Tahawi is the simplest, the most effective, and the least controversial.

It serves as a sound basis for Islamic faith and is the most reliable of the early articulations of Muslim belief. Because Imam al-Tahawi avoided innovated theological issues and systematically presented the most fundamental aspects of dogmatic theology, his creed has achieved an unusual degree of acceptance in the Muslim world. In the thousand years since it was written, many great Muslim scholars have penned commentaries on it. It is still studied throughout the Muslim world and increasingly in the West.

- Belonged to a family of scholars and judges; a follower of Hanafi madhab.

- He was imprisoned because of his objections to certain wording of an ode in praise of the Prophet (peace be upon him). He was also convicted because of some other beliefs that were not concurrent with norm and Sultanï¿½s viewpoints.

- In this commentary, Ibn Abi Al-ï¿½Izz make Qurï¿½an and Sunnah as his primary source and takes them at their literal value and avoids metaphorical understanding if there is no proof.

- In the commentary, he does not differentiate between essential and active attributes of Allah, meaning Allah is not only Living and Powerful, but also creating things and providing for them.

Imam Abu Ja'far Ahmad bin Muhammad bin Salamah bin Salmah bin 'Abd al Malik bin Salmah bin Sulaim bin Sulaiman bin Jawab Azdi, popularly known as Imam Tahawi, after his birth-place in Egypt, is among the most outstanding authorities of the Islamic world on Hadith and fiqh (jurisprudence). He lived 239-321 A.H., an epoch when both the direct and indirect disciples of the four Imams - Imam Abu Hanifah, Imam Malik, Imam Shafi'i and Imam Ahmad bin Hanbal - were teaching and practicing. This period was the zenith of Hadith and fiqh studies, and Imam Tahawi studied with all the living authorities of the day. He began as a student of his maternal uncle, Isma'il bin Yahya Muzni, a leading disciple of Imam Shafi'i. Instinctively, however, Imam Tahawi felt drawn to the corpus of Imam Abu Hanifah's works. Indeed, he had seen his uncle and teacher turning to the works of Hanafi scholars to resolve thorny issues of Fiqh, drawing heavily on the writings of Imam Muhammad Ibn al-Hasan al-Shaybani and Imam Abu Yusuf, who had codified Hanafi fiqh. This led Imam Tahawi to devote his whole attention to studying the Hanafi works and he eventually joined the Hanafi school.

Imam Tahawi stands out not only as a prominent follower of the Hanafi school but, in view of his vast erudition and remarkable powers of assimilation, as one of its leading scholars. His monumental scholarly works, such as Sharh Ma'ani al-Athar and Mushkil al-Athar, are encyclopaedic in scope and have long been regarded as indispensable for training students of fiqh.

He is also directing research on Religious Traditions, which includes Islam and other religions at the Islamic Academy, formerly Centre for Religious Studies and Guidance, Aligarh, as its Director since 1996.

For more than ten years, he has pursued research in various aspects of Islamic thought at the Centre for Academic Research, Imam Muhammad b. Saud Islamic University, Riyadh.