A Madinan View on the Sunnah, Courtesy, Wisdom and Battles 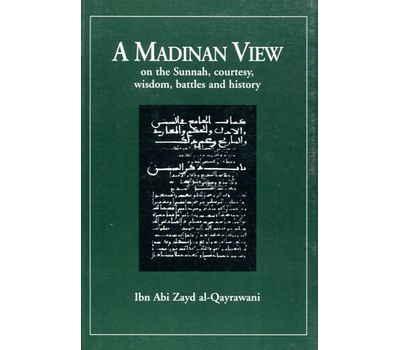 Imam Malik said, "There is only one truth. Two contradictory statements cannot both be correct," and "Knowledge is a light which Allah places wherever He wills. It is not much narration of ahadith." These apparently obvious but still powerful statements set the tone for this book which gathers together in one volume matters which often challenge the cosy but fallacious consensus that modern Muslims imagine to be so safely established.

The beginning is an extensive treatment of 'aqidah according to the People of Madinah, and an examination of the contentious subject of bid'ah - innovation in the deen. One of the following chapters is an exposition of the relative merits of ahadith and 'amal - the practice of the People of Madinah - an argument which is rarely heard today. A great deal of the book is on the noble qualities of character as exemplified by men and women who held to them under extreme political pressure, in both wealth and poverty.

The Author Ibn Abi Zayd al-Qayrawani 310/922 - 386/996 at 17 years old wrote his famous Risalah in response to a request from a friend for a book with which to "teach children the deen as they learn the Qur'an" and that work went on to become one of the key reference works for those concerned about the school of the People of Madinah. He lived in Qayrawan under the shi'ah tyranny of the Fatimids, where he resolutely kept alive the 'aqidah and teachings of the people of the Sunnah at great risk to his own life and safety.

The Translator Abdassamad Clarke was born in Belfast and studied in Edinburgh and Cairo. He has translated the chapters on the Khulafa ar-Rashidun from as-Suyuti's Tarikh al-Khulafa' which is published by Ta-Ha as The Khalifahs who took the right way. Recently he also translated the entire Al-Arba'un an-Nawawiyyah with its commentary which was published as The Complete Forty Hadith by Ta-Ha Publishers.