Dawn in Madinah: A Pilgrim's Passage 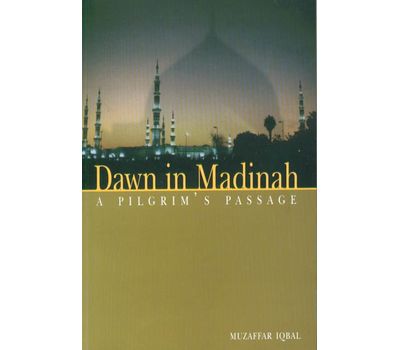 Dawn in Madinah: A Pilgrim’s Passage is a vivid account of a month-long retreat in the Prophet’s Mosque in Madinah. The luminous details of this sojourn (Ramadan 1418/December-January 1997-8) in Islam’s second most sacred mosque are superimposed on the historical events that shaped the Muslim community during its initial formative period. Numerous episodes from the life of the Prophet form the backdrop for the slow unfolding of a narrative filled with intense reflections on contemporary Muslim life. Woven into the tapestry of this unique work are the desires, passions and spiritual struggles of many pilgrims who were present during the month of Ramadan in the Mosque, fourteen hundred and eighteen years after it was built by Prophet Muhammad and his Companions soon after their arrival in Madinah. This juxtaposition of contemporary lives and those lived fourteen centuries ago, creates a mosaic.

What unites the various strands of the book is the trans-historical spiritual quest of countless individuals who populate this rich narrative. We witness an episode from the life of Abu Lubabah—a Companion of the Prophet who once tied himself to a pillar in the Mosque vowing never to leave until Allah Himself forgave him for what he saw as a betrayal of the Prophet’s trust—as vividly as the life of the feverish and consumptive Rashid Ahmad, a coal-miner from interior Sindh in Pakistan, who slaves away his life under horrific conditions in one of the valleys of contemporary Arabia. One chapter of the book recounts the experiences of a memorable night in Hira, the cave on top of the Mountain of Light where Prophet Muhammad had received his first revelation in 610 AC.

Muzaffar Iqbal is the President of the Center for Islam and Science, Canada. A scientist by training, an Islamic scholar by vocation, a novelist and a poet, his other works include two novels, an Arabic-Urdu bilingual edition of Divan al-Hallaj, Islam and Science, and Definitive Encounters: Islam, Muslims, and the West.