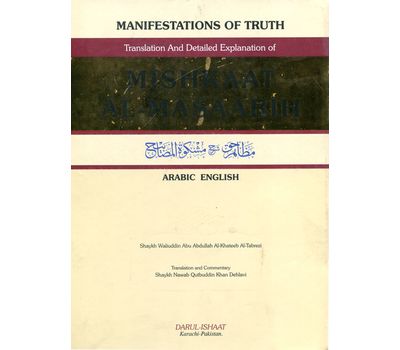 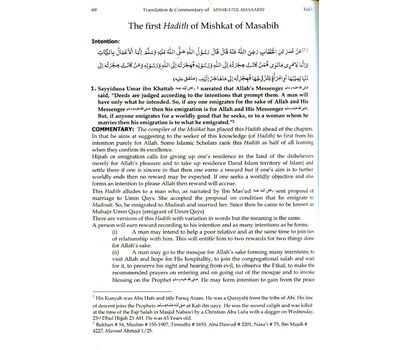 An English translation and detailed commentary [with Arabic text] of the Mishkat al-Masabih of Imam Waliuddin Abu Abdullah Mahmud Tabrizi. A comprehensive book on hadith taught around the world to students of the subject, especially in the Subcontinent where it is studied before the six famous collections, to be able to prepare for them.

Most of the hadiths contained in it are from the Sihah Sitta [the six Authentic compilations of Hadith].

The commentary used, Manifestations of Truth, is an English rendering of Nawab Qutbuddin Khan Dehlawi's Mazahir-e-Haq, originally compiled in Urdu. A reliable and authentic explanation which has gained widespread acceptance in the Indian subcontinent.

The author Nawab Qutbuddin Khan Dehlawi was born in 1219 AH to a noble family in Delhi. He became a prominent student of Shah Muhammad Ishaq Dehlawi (great-grandson of Shah Wali Allah Dehlawi), and acquired proficiency in the sciences of fiqh and hadith. He also gained knowledge from the scholars of al-Haramayn. He was known for his adherence to the sunnah and shari'ah, his humility, and piety. He wrote a number of works, of which Mazahir-e-Haq was foremost. He passed away in Makkah in 1289 AH.