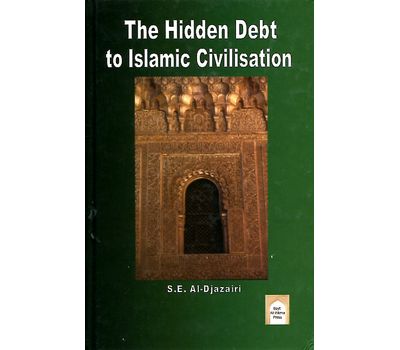 "If there is much misunderstanding in the West about the nature of Islam, there is also much ignorance about the debt our own culture and civilisation owe to the Islamic world. It is a failure, which stems, I think, from the straight-jacket of history, which we have inherited. The medieval Islamic world, from central Asia to the shores of the Atlantic, was a world where scholars and men of learning flourished. But because we have tended to see Islam as the enemy of the West, as an alien culture, society, and system of belief, we have tended to ignore or erase its great relevance to our own history."

The Hidden Debt to Islamic Civilisation is a thorough study of that relevance and how it has been hidden from Western consciousness. Al-Djazairi puts his many years of expert work as an historian into this book.

From street lighting to soap, from trigonometry to algebra, from windmills to universities, from nutrition to surgery of the eye, from the paper industry to mass literacy, from the banker’s cheque to religious freedom, Western civilisation owes its emergence to its encounter with the Islamic world.

Yet few people are aware of this debt. Political efforts at overpowering the Muslim world have had no small part to play in this concealment, just as they had no small part to play in the decline of Islamic Civilisation. Recognising and understanding this debt is a vital part of bringing about a more just world where Islam can again inspire great achievements to benefit humanity.

Dr Salah has lectured and researched at the University of Constantine ( Algeria ) for more than ten years. He also tutored at the Department of Geography of the University of Manchester . More recently, he has worked as a research assistant at UMIST ( Manchester ) in the field of history of science.

Dr Salah has published many academic works. Publications in scientific journals include papers on environmental degradation, and desertification, as well as papers on politics and change in North Africa , and problems of economic and social development. He has also contributed historical entries to various encyclopaedias such as the Columbia Gazetteer, Encyclopaedia Britannica, and Francophone Studies. The largest written contribution by the author has been on the subject of Muslim science and civilisation, where many of his articles, can be found (in PDF format) on the website: http://Muslimheritage.com